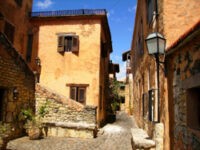 La Romana is a city on the Dominican Republic’s Caribbean coast and a gateway to nearby resort areas. Casa de Campo International Tourist Port (Muelle Turístico Internacional Casa de Campo), located on the West Bank of La Romana River or Rio Dulce, has been utilized primarily for the docking of commercial ships, primarily for the transport of sugar and molasses. Upon exceeding the capacity of its port, the Central Romana Corporation built its new tourism focused port on the east side of the river. Overlooking the Chavón River, Altos de Chavón is a re-created 16th-century Mediterranean village with artists’ workshops. An obelisk painted with colorful images of local life stands in the city center. South of the city is Catalina Island, with beaches, coral reefs and the wrecked ship of pirate William Kidd.

La Romana has plenty to offer. If you’re a night person, you will be amazed by how many different things you can do in such a place. The locals always have fun events going on depending the time of the year so make sure you research before planning your trip. A must see is Altos de Chavon. This “village” was done replicating the 15th century colonial architectural style and has many restaurants, a museum with Taino artifacts, breath-taking view of the Chavon River. T