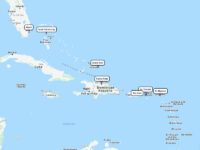 There are a wide variety of cruises that depart from Miami, Florida, which is why it is an excellent choice for embarking on a memorable cruise holiday. Besides that, PortMiami is the world’s largest passenger port and one of the[…]

Cruising aboard Norwegian Gem elevates fun at sea to an art form. Norwegian Gem demonstrates a true mastery of the craft with an onboard collage of fun spots for you to enjoy.

Grand Turk Island, located in the Atlantic Ocean, is the capital island of the Turks and Caicos archipelago and home to a state-of-the-art luxury cruise liner hub. Cockburn Town is the heart of the island, with a remarkable collection of[…]

St. Thomas is the gateway island of the U.S. Virgin Islands in the Caribbean Sea, best known for its beaches and snorkeling spots. The territory’s capital, Charlotte Amalie is a busy cruise-ship port. Historic buildings include a 1679 watchtower called[…]

St. Maarten, a popular cruise-ship stop is part of the Kingdom of the Netherlands, an island country on the southern part of a Caribbean island shared with Saint Martin, a French overseas collectivity. The island of Sint Maarten or Saint[…]

San Juan is the capital and largest city on Puerto Rico’s northeast coast. San Juan, Puerto Rico’s capital, offers a busy nightlife, numerous casinos and clubs, and is adjacent to some of the island’s top all-inclusive resorts. San Juan, often[…]

There are plenty of daily activities on board Norwegian Gem to keep you busy. Norwegian Cruise Line has everything a discerning cruiser could want, bars, pools, sports venues and shops.

Great Stirrup Cay is a small island in the Bahamas owned by Norwegian Cruise Line (NCL). It is often used as a stopover for Caribbean cruises from Florida. It is part of the Berry Islands. The island was purchased by[…]