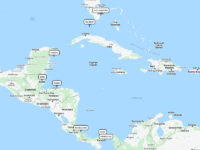 Cruises to Key West. As part of the Florida Keys archipelago, Key West is famed for its pastel-hued, conch-style houses, it’s a cruise-ship stop also accessible from the mainland via the Overseas Highway. It’s known more for its coral reefs, […]

Experience the relaxed ambience onboard Viking Star attentive service from a friendly staff that knows what hospitality means, you’ll find your Viking Star ship truly is your home away from home.

Cruises to Cozumel. Cozumel is Mexican island  in the Caribbean Sea at tip of the Yucatan Peninsula, regular port of call on Western Caribbean itineraries, particularly those leaving from Florida. The main town on the island is San Miguel de[…]

Cruises to Belize. Belize, formerly British Honduras, a nation on the eastern coast of Central America is regular port of call on Western Caribbean itineraries, particularly those leaving from Florida. Situated south of the Yucatán Peninsula, Belize is a land[…]

Cruises to Isla Roatan. The beautiful Caribbean island of Roatan, the largest of the Bay Islands, which are a part of Honduras, about 40 mi off the northern coast of Honduras, regular port of call on Caribbean itineraries, particularly those[…]

There are plenty of daily activities on board Viking Star to keep you busy. Viking Star has everything a discerning cruiser could want, bars, sports venues and shops.

Cruising to Puerto Limon, Costa Rica Puerto Limon is a district, the capital city and main hub of Limon province and the most important port in Costa Rica. Limón is also a main city for cruise ships traveling through the[…]

Cruises to Colon, Panama Colon sits on the Caribbean coast and it is the capital of Colon Province, in Panama. Colon is at the entrance to the Panama Canal. As a tourist destination, Panama is most famous for the Panama[…]

Cruises to Panama Canal The Panama Canal is an artificial 82 km waterway in Panama that connects the Atlantic Ocean with the Pacific Ocean. Before the Panama Canal was built, ships traveling between the east and west coasts of the[…]

Panama City, the capital of Panama, is a modern city framed by the Pacific Ocean and man-made Panama Canal.